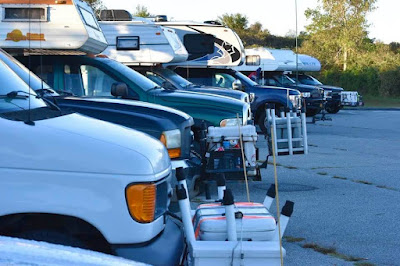 Writing about the reasons for bad fishing (or good), is both the blessing and a curse. I can cite whatever junk science I want, and nobody can call me out on it, because there are few objective quantifiable measures. But at the same time, I can write today that the fishing stinks, and then walk into a sea of diving birds and fish this afternoon during this Northwest blow.
I’ll take my chances and hope to be proven horribly wrong.
What I can say with certainty is that the Montauk Surf Classic wraps up at 12 noon today and not a single bass is on the board as of 8am. I can also say that I put in almost two full days on boat and foot and didn’t see a single Albie, a congregation of birds, or anything that remotely resembled a classic Montauk fall blitz. No boats were out in the Bass locations jigging the rips on the flood, let alone surface activity. If that were to happen any time soon, based on the boats that are out there, pumped with memories of years past, the fish would probably be put down mighty quick.
But as fishermen we seek answers and causality. Did we have a bad year for Bay Anchovy, or did they scatter after Henri? Or are they still in the bays? Yes, there is still small bait and young of the year bluefish in the bays, a little late for this time of year. What about the juvenile menhaden, mullet and sand eels? We are just not at that level of sophistication where abundance of bait species is measured. Few if any fishermen actually take note of such things nor look for it on Sonar.
While pontificating on such topics, I recall years past conversations with late Surfcasters like Fred Scwab and Willie Young, who pointed out to me that the early fall white bait phenomenon that we enjoyed in the 1990s was not the historical norm. There was a time when the Montauk Surf Classic itself was held much later in the fall, but was moved up to late September to coincide with the emerging daytime white bait phenomenon.
As for me, the devil on one shoulder is urging me to trailer the boat west, in order to salvage whatever may happen with the remainder of the fall run. The Angel on the other shoulder tells me to remain committed to Montauk, she’s done right by me for close to 30 years.
So here I shall stay.
Posted by The Average Angler at 9:36 AM