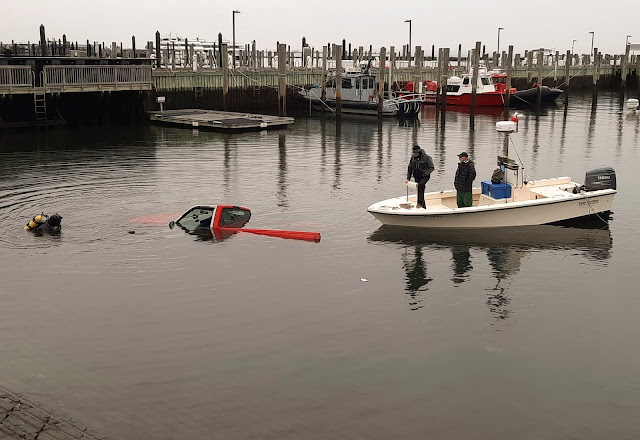 I knew Friday was going to be the only shot I would have to get out this week with the forecast not looking good for the boat through and after the weekend. Tried to get some clients in, then tried some friends, then my daughter, when I asked Charlie, "See you at 4 am, I'll bring lunch" 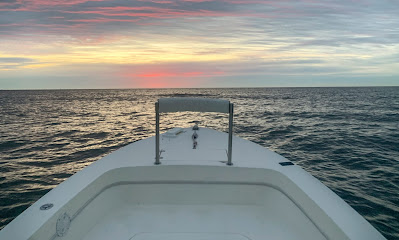 We were in the water at Atlantic Highlands Marina by 630 and after turning the corner we found that SW wind had the ocean up and a little sporty. We pushed down the beach and out a bit but didn't find any life worth sticking around for, or even conditions you could safely fly fish in. 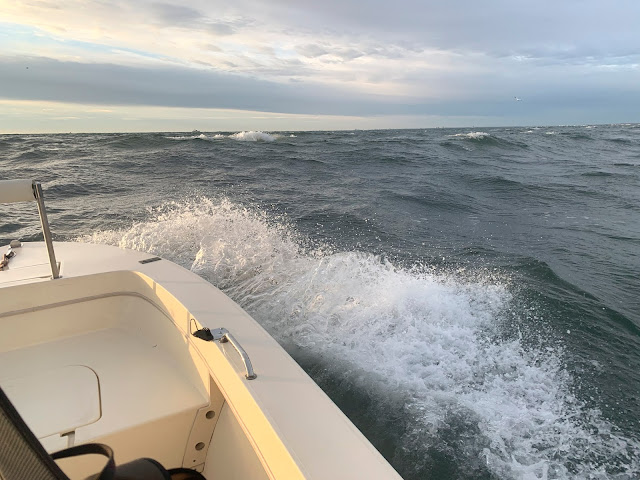 By the time we circled back the fleet had taken up position between the channels, and they never moved. We had one fish, over 30 inches release itself at the boat as I reached my thumb into his mouth. We decided to leave the party and went and found our own fish, luckily. Drift after drift brought feisty and fat school bass to hand all eating sand eels flies. Today was interesting, birds around, not picking as the bass never brought them up to the surface. A 350 Depth Charge line wasn't enough, and Charlie went to the 450 gr and it made the difference. 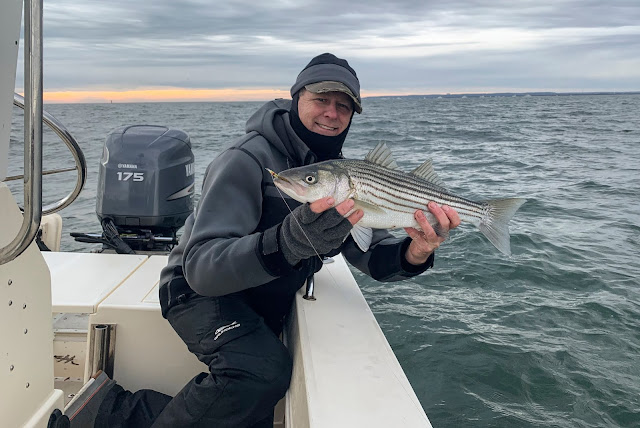 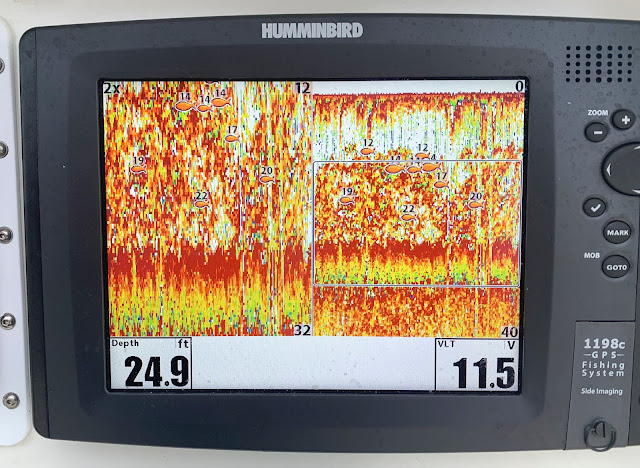 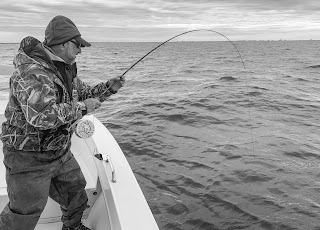 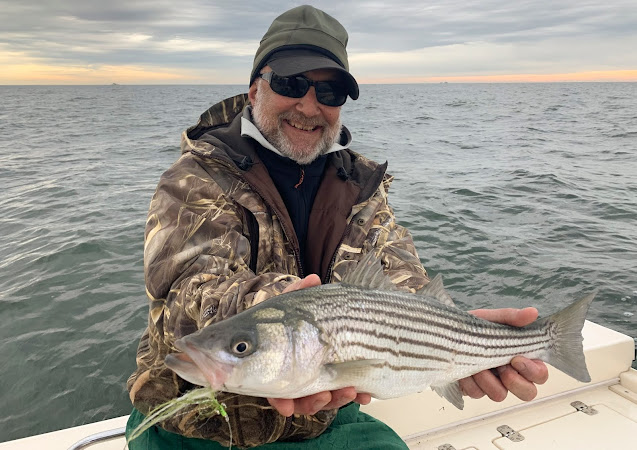 We had nice weather through the bite and then the wind picked up and the colder air came in along with some rain. We tried the Bug Light on the outgoing but only marked fish and had a whale and a seal for some company. Another quick trip out front and we found tons of birds with gannets diving on large adult bunker. We threw big flies but didn't mark or see anything on them. And just about after 2 o'clock we decided to head in.
There was about 1-1/2 hours left till dead low and the ramp had a few boats ready to take out. After docking we got boarded by the State Police Marine Division checking credentials, safety equipment and compartments for any fish. I went and got the truck and backed it down the slick ramp. When in place I put into park, shut down the engine, applied the emergency brake and chocked the wheel.
I pulled the boat on and got down and winched it tight and applied the chain for safety. Funny, a guy from Blue Marine was there taking out a large boat and said "Its nice to see someone here who knows what their doing".....30 seconds later my truck was submerged. 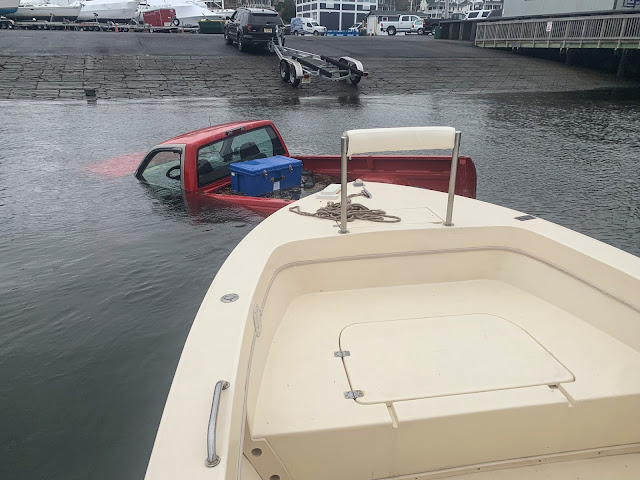 Everything was done right, with a lot os people watching, including the State Police Marine Officer. It just happens. Charlie was right next to the truck, with the guy, and watched the truck jump the wheel chock and slide into the water. Charlie valiantly tried to get in the truck, then moved to the winch. In the end he wound up swimming and holding onto the boat until I could fish him out. 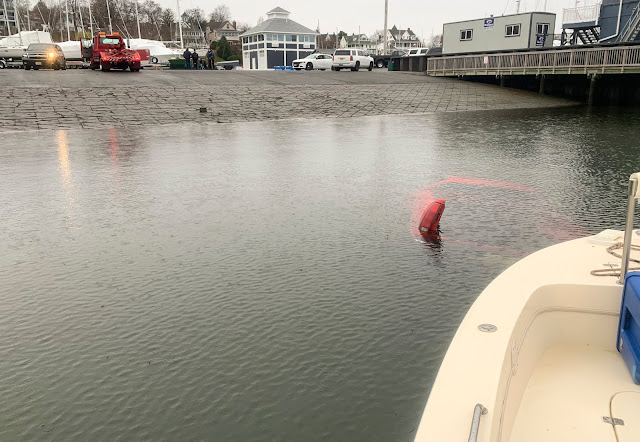 Charlie and I stood on the bow of the boat for an hour before the divers and tow truck responded, hooked it up, and got it out. They did a great job. As we waited I took a pic looking to the ramp and you can see the chock just sitting on the ramp. 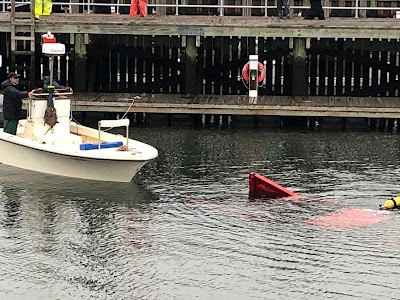 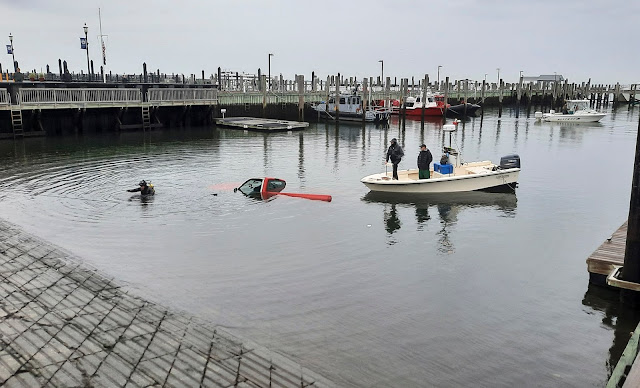 I reached out to Paul Eidman who was there in twenty minutes. After we were able to disconnect the boat from the trailer in the water and tie it off we headed to Middletown Trailer Supply and had the damaged tongue replaced. Charlie had left his truck at my house so Theresa brought it along with a change of clothes for us as we were soaked and frozen. 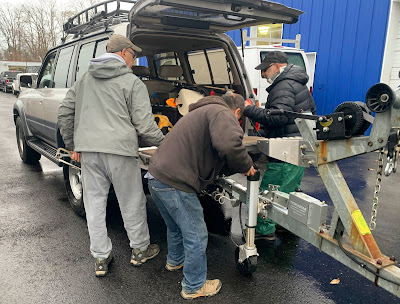 When we arrived early this morning Charlie commented on the "Trucks Don't Float" sign that is posted around the ramp. The ramp where most operators cringe when its near dead low. It's a great ramp, but can be a severe incline or decline when the water has left or is just starting to arrive. Paul used his truck to get my boat up and out and we used Charlie's truck to bring it back home. 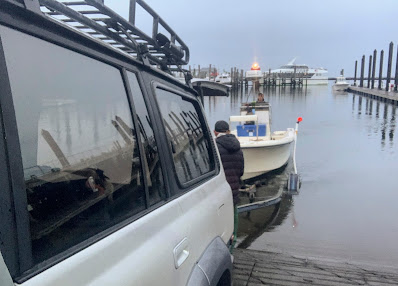 It always could have been worse, for any situation. Charlie could have got jammed up while trying to stop the truck and boat, run over or caught and swept under. The trailer could have been jacknifed and flipped the boat. But it all worked out, no one hurt, except my feelings, but I remain confident as I took all necessary safety precautions as I always do when launcjing or taking the boat out of the water. 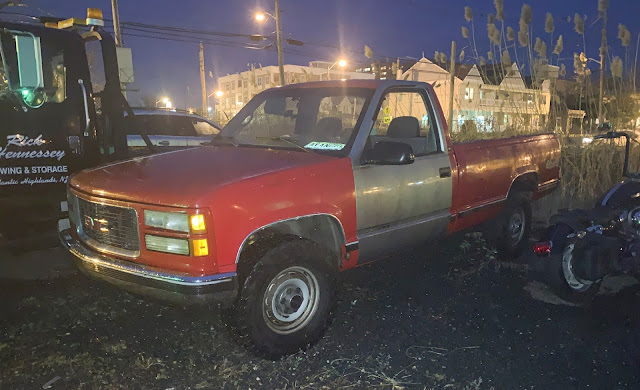 Of the five people who talked about my truck, five of them said "It's done". I went for a visit to Hennessey Towning's yard and disconnected the battery as instructed by my friend Jim who is an ace mechanic. She get towed tomorrow by AAA to my house where I will begin the process, hopefully not a waste of time or money, in getting her back running. My early goal, pass by Hennessy's, he was the most honest and vocal about my trucks fate, and to launch my boat before years end. 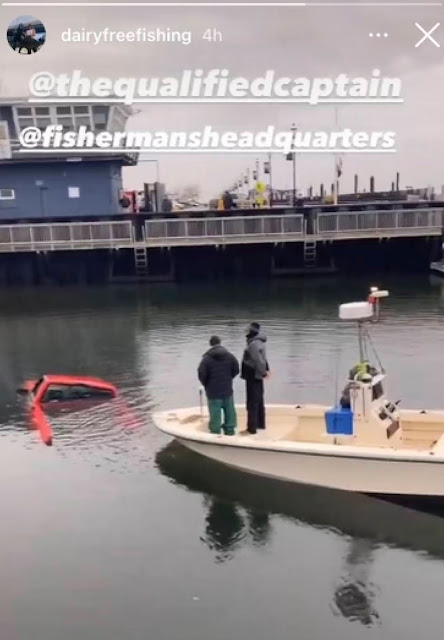 After hearing the news through the grapevine Capt Jason Dapra reached out to make sure everything was okay.. I explained to him exactly what happened and he too is always cautious and concerned about that ramp at low tide. He followed our conversation up with a screen grab from some forum, titled, @thequalifiedcaptain. In my life I never judge or throw stones at anyone when they have misfortune, because, I know, that at any point something bad, which could look like a careless mistake, could occur to me, and I would not want to be judge and jury to something I hadn't been witness to or experienced myself. They call them social media tough guys, or keyboard super heroes. Call them what you like, I hope he got the satisfaction he was seeking in his post.
Posted by The Average Angler at 9:52 PM