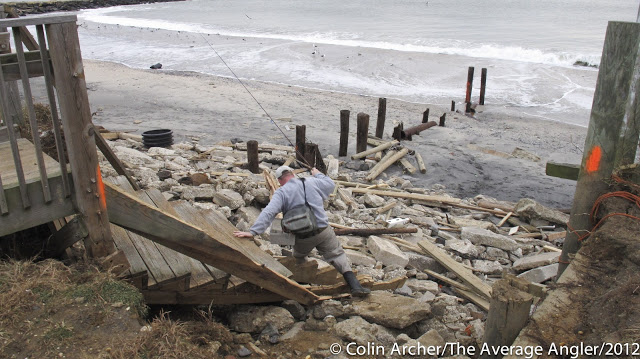 The above picture was taken seven years ago today. November 2 2012. Days after the storm of the century ravaged the east coast. I just needed a break from all that was Sandy and made my way down from Darlington to free my mind and make some casts. Seven years later and rebuilding for some still continues.

From 2012 on we saw some great striped bass fishing. There were days, weeks and even near months where you could count on catching fish, consistently, either from a boat or the sand. The conservation minded anglers still saw the big picture as the flurry of catching was starting to come in spurts rather than runs.

As we watched big fish after big fish being harvested we wondered when it would all end. Well the end is near. A few days ago the ASMFC released there decision on how to manage a fishery that is being overfished coupled with depleted stocks. While we are seeing the last good spawning years fish, namely 2011 and 2015, other than that it is dead. Yes, there are still big fish, but its big fish or small fish. Missing are those 28-35" fish. So what happens, anglers who are harvesters take what they catch, and that is the big fish that are the only hope to save the fishery.

The ASMFC has decided that a 28-35" slot fish will rebuild and save the striped bass. They are sadly mistaken. They offer states along the east coast a conservation equivalency meaning that they can mange their own state as long as there is a 18% reduction in the commercial take. Well New Jersey is a state without commercial fishing, that is why we have the bogus bonus tag fish system in place. They also had made circle hooks mandatory....great.

What does this mean? Nothing. Its not a Band-Aid. Its not a solution. The ASMFC commenced that they were disappointed there we not more public comments submitted....that is what they are hanging their hat on. Sad.

Last week I was lucky to have two banner trips on the same day. Big fish, smaller fish, just a lot of fish. That made me hopeful for trips to come. But, we had a blow. Fish move, quickly. Here one day gone the next. And that is what has happened.

Today was Saturday. The weekend. Ridiculous amount of boat traffic. Water still off from the blow. Boats burning fuel looking for the fish. Boats criss-crossing each other on the troll. Oh, the troll, nothing like a bunch of Mojo trollers to keep the fish off their bite. There were fish caught....maybe not in the back, maybe across the pond, maybe outside of the thin red line that appears on my Lowrance finder. It was enough, I'm sure, for frustrated anglers to say...."It's over".

With a Monday trip two days away I sit nervously wondering what my first move will be out of the barn. West, north, east, or south. Which way to point the boat and look for signs of life? Remember those fall mornings that never disappointed as far as life was concerned. Birds on bait everywhere? Fish, bass or blues, in both small and large size, and enough of them where 30 boats weren't all on the same pod. You could pretty much count on catching, or at least fishing into fish.

So lets recap. In the last two weeks we had a big school of big fish swim south somewhere between 2 and 8 miles off the beach. Then we had them good in the bay and just like that it seems to be over. The beaches have been dead, outside of the 50" fish caught on IBSP on a salted clam. That fish has become "the fish" off the beach this year. There was a weak mullet run, yes they were there but were there good fish on them. Peanuts are around, but the still near 60 degree water temperatures haven't seen they leave the backwaters. Sand eels? Yes of a bit, and some in close but not a savage sand eel bite like in years past....like say the infamous 2011 Ocean County bite.

So for Monday I need to make sure the boat is full of gas as I anticipate running a lot looking for the fish. I pack my best lunch because sometimes that all you have to offer a guy. If he's fished with you before he's heard all of your stories.....so I better come up with new material...quick.