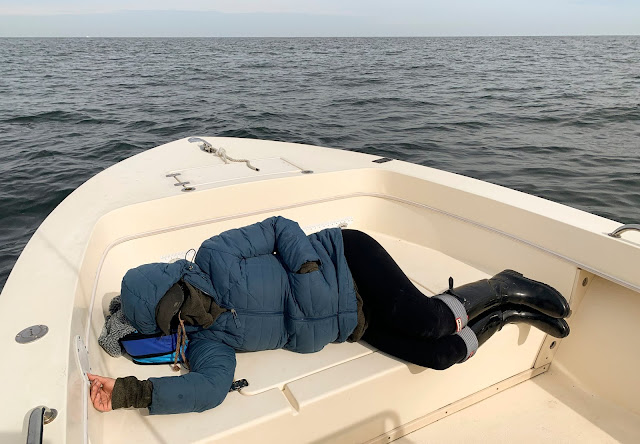 With all of those reports I figured it was a great day to invite the wife to scout before next weeks boat trips. Why read reports when you can go and make them. I'm not sure of what you have heard or read from other captains out there but here's what I did looking for that Mother lode every one is speaking about. 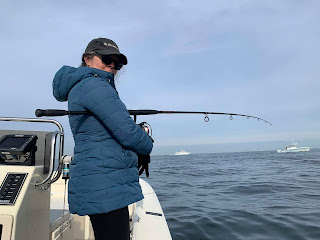 Wet at 830. Rounded the Hook. No birds, or boats for that matter in sight. Headed out about 1.5-2 miles and found some birds scattered mostly on bait....no fish showing on top or on the finder. Angled out to hit inside the EEZ (federal line) at three miles just outside the Shrewsbury Rocks. Boats anchored up bottom fishing. Not much for life. Headed south below the rocks but north of the Normandy Invasion floatilla that was from Shark River Inlet to Asbury Park. We were in the area with boats that really played well. Marked fish low and for Theresa it turned out to be dogfish that ate the Ava with a green tail. Headed back up along the legal line and saw a lot of boats east??........ I though maybe with the tide change something might be cooking between the channels and around the lighthouse but when we got there with slow moving water...nothing but bait. And that was it. 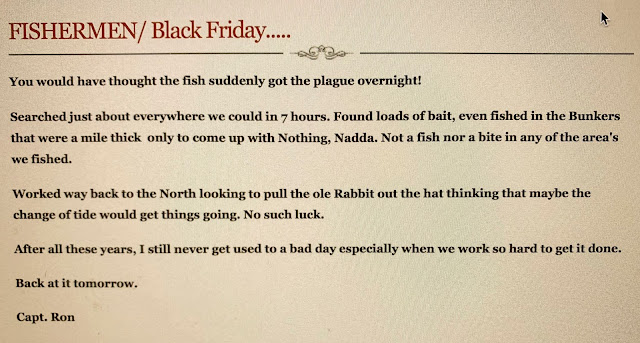 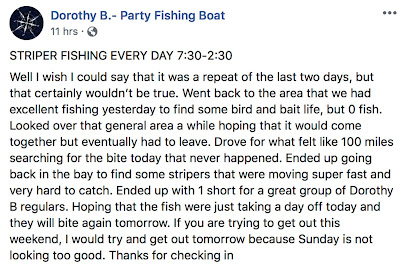 At least misery loves company. Above is Capt Rons Fisherman report followed by the Dorothy B.  I saw them back and forth on the hunt as we were. Thats a lot of fuel and time and tough day for a heavy boat of anglers. 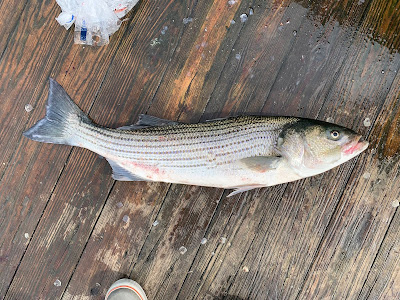 So when we get back to the dock I see a guy cleaning fish. Nice older man. Big smile on his face. "Hey nice fish" I say. Told him we didn't find anything and asked him where he was. "Oh out about three miles or so......." Wait "or so". He said they caught three in ten minutes when they came up along the boat. So thats where we are today? So what to do? Or not to do?  Do I stick to my guns and stay true to myself or do I do what doesn't sit well in my gut. Do I run off, over the legal line, and put myself, my clients, even my wife, on big fish that are doing all that is described in the first paragraph?

As I sit here now I say no, never, absolutely not. The angel is in my ear to my right. Integrity is what you do when no one else is watching. But, there is that other side, the left side, and the devil that says, "Feck It, everyone else is doing it and you're not keeping them anyway. Go have fun and give the paying clients what they came for".........

So I'm sticking to my guns. If you fish on my boat you can't keep a fish and we will only fish, meaning dropping lines in the water, inside the EEZ, the legal line. 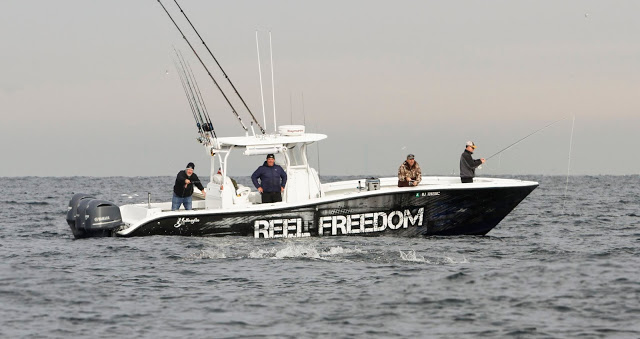 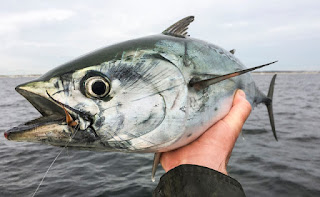 In other disappointing news. Last year today was one of the last great albie days of 2018. Shrewsbury Rocks was rocking. I think this past blow shut it down. It was great fishing with bigger albies as part of that mix.

And more concerning is the bay, specifically the Raritan Bay. I know usually the big fish pass by, doing that now way off, and then the smaller fish follow. But at this time thee should be some fish in the bay on the bait. There is bait being flushed with each tide. We found it near the Ammo Per with some birds on them but not a boat or a bass to be found. I think that great fall bay bite is well, "Over Johnny", unless it just comes late this year. 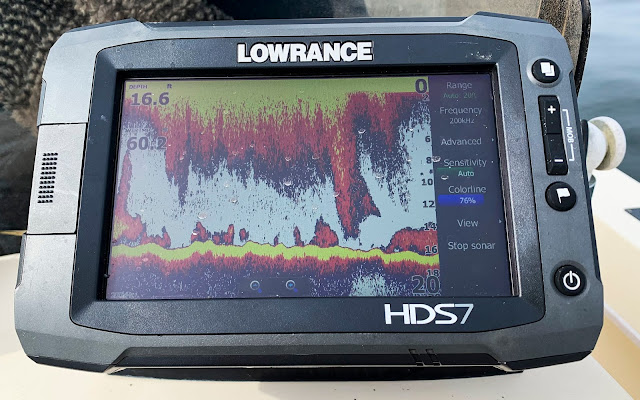 And lastly. We don't hear much about the ASMFC much these days. The diehards are still out saying that we can change this fishery. 'Write your comments" "Go to a hearing" "Call your representatives"......how about just stop killing fish? Less dead fish is more living fish. That "One for the table"......well they pile and add up.

This year, different from last, you won't see the mates sitting on top of piles of dead fish. You will still see the six pack boats not getting it and having their sports pose, like five or six of them with two fish each, with dead legal fish. While that may attract some business it gets a lot of push back from conservative minded people. And what else you will see is the following. You won't see blacked out horizons in fish pics these days....why....because land isn't in sight when the fish are. What you will see is that "one for the table" pic set up to be "proof" that the fish were sought after and caught inside the line. Look at the history for the guys that catch, never want you to see the beach, apartment building, tower, ect .....now you can see it all because guess what, I don't care if you know that spot because thats not where we fished or caught. Dock pics are always safe....you should be seeing more of those. And just one more. If there are 1,000 boasts on the fish, and you're in it, with air craft carriers and destroyers and small amphibious boast staging for the invasion, how come there are never in the background. Out there you cant take a piss without someone seeing you're junk, but hold up a 40 pound bass and they all part the sea? 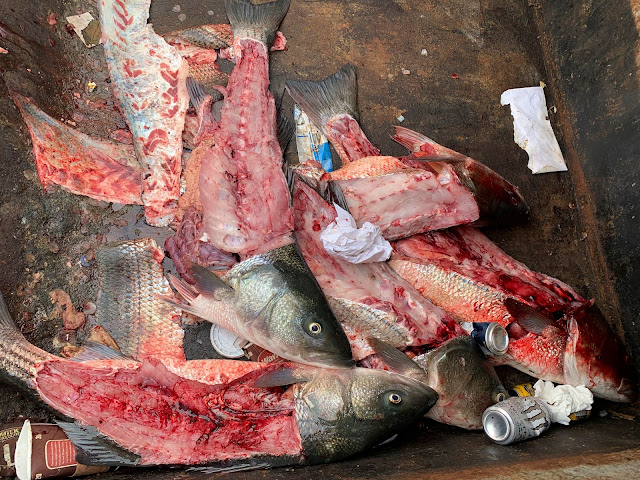 Posted by The Average Angler at 8:12 AM