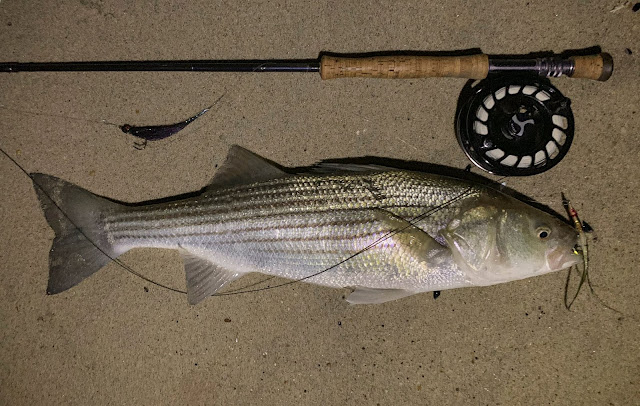 Wind was steady ESE at some speed that made fly fishing difficult. Hard south to north sweep. Started in the dark with a popper/dropper on an intermediate line but quickly gave up because it was blowing and it was just the start off the incoming tide which was low at 330 am. I went to t 300 gr line and black Deciever with a Brad Buzzi sand eel fly trailer.

Found a nice notched groin that gave me some protection from the sweep, waves and wind. Picked the above fish right at 6 am, just 90 mins after I started fishing. Decided to move north to where the rocks are closer in sets and picked up another, nicer fish, but it came off just as I started the drag up out of the trough. 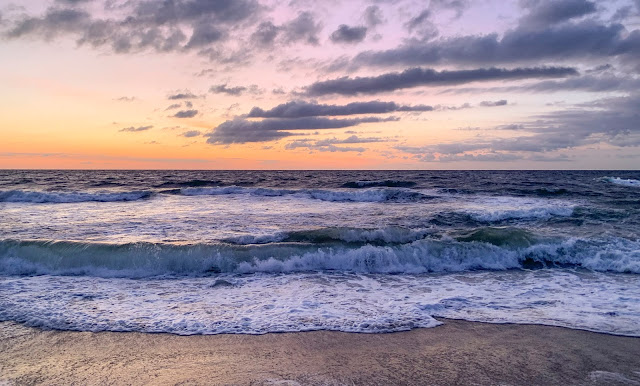 The first push of fish has started and there are big ones in the mix, and sadly, the party boats have found them, as well as the other kill crowd. I'm not judging, I know its all legal, but I'm just sayen'.
Below is the report from a Belmar head boat from today.....

We had MONSTER STRIPERS again today.  They were huge, up to 40lbs., and we broke a lot off. When we got on them, we saw them really good and they were piled up under the boat top to bottom.  We also mixed in some BONITO and ALBACORE.
We are not sailing tomorrow, Thursday, Oct. 17th, because of very high winds, but we will be right back out there after this weather passes targeting those huge STRIPERS.

Posted by The Average Angler at 3:19 PM