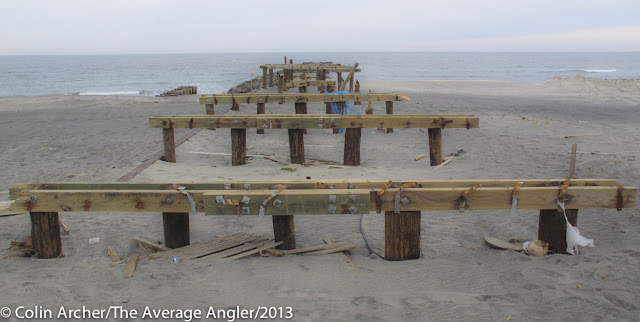 Today the air and water were relatively calm. A NE wind created a little white water but I couldn't find a striper in it to bite. Things looked peaceful, even the lingering signs of the devastation that Sandy left.....and now we're waiting for Nemo.
I don't know who to trust anymore. The media is just so out of control that even some snow forecasted becomes "StormWatch 2013". I know this is being tracked as a historic storm in terms of snowfall for New England, but others are saying the 40N 70W intersection is going to be were the fronts collide. We can POSSIBLY expect flooding, high winds to 50 mph, rain, and snow with accumulations along the Jersey Shore up to 6 inches with 12-18 inches in New York City, that according to the Weather Channel HERE .
There seems to be a line E to W that falls somewhere along northern New Jersey, and another N to S that runs along the Turnpike, and it looks like we could be spared....but who knows.
Posted by The Average Angler at 6:55 PM