02.01.13 Looking for that February bass...found something else 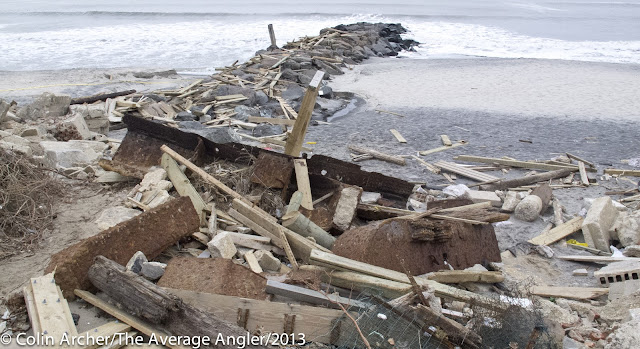 While out this morning ( for about a half hour - it was cold! ) looking for that February bass I noticed something else. Anyone who has hit the beaches since Sandy hit knows things have changed. The access, the structure.....and definitely the amount of debris that has found a home along the shore. There have been successful cleanups by the various town departments of public works along the shore. Several groups have had successful beach sweeps in towns like Ocean Grove and in parts of Sandy Hook and Island Beach State Park. Tremendous amounts of trash and debris have been removed....but there is more to be done.
Today I noticed myself taking what has become the "new" path down to the water. We have all got used to the debris and have just walked past. That's all we can really do as must of the dunnage is heavy and for some dangerous to handle. Several contractors are working to construct new bulkheads along the beach and are removing that debris as they go.
As always, beach access is a hot topic for those for and against it. After Sandy most access points to the beaches were destroyed and signs or fencing posted by towns. It was done for several reasons, one, to limit the potential for looters and two, to reduce the potential for injury for those trying access the beach. As spring will come I fear that if all that debris isn't removed and safe access points including steps, aren't repaired then those points will be shut down. Sure anglers can maneuver their way around, but the young and old will surely be prone to injury and then litigation against the towns for not properly maintaining the access.
Last fall the DEP plan of having each town devise and institute access plans and locations was approved. Not all towns, supported by residents that live directly on the beach and pay taxes to the towns, believe in access for everyone. The damage done by Sandy and the collateral damage and debris will only give "them" the tool they need to reduce access. The buzzword will be "safety". That word is a game changer.
Anglers, surfers, and the general population need to stay on top of this or we may just lose it when the nice weather comes. The towns have much more on their plate as they fix the beach clubs, boardwalks, and places that bring in revenue. Free beaches don't do much for the town, except increase phone calls about parking and traffic on the streets or beaches in front of the owners homes.
If you see anything about clean-ups or beach sweeps pitch in a hand and sound the alarm by social media, email, or phone calls. The access you keep open may be to your very own favorite honey hole.
Posted by The Average Angler at 10:50 AM