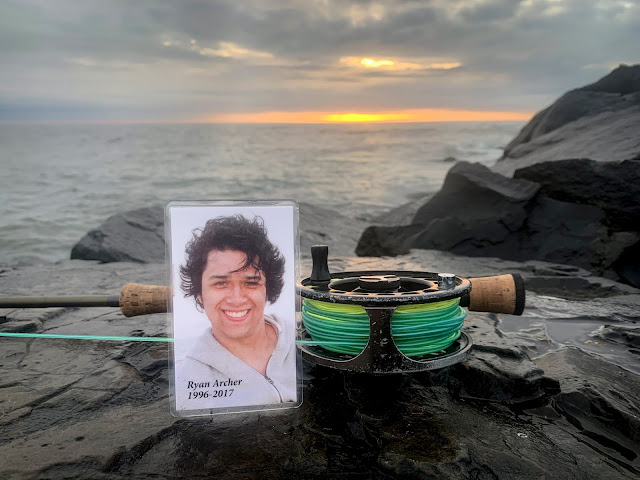 Twenty-five years ago Ryan was born. I would have loved to sit down with him and have a beer and discuss what he thinks about the world today. I often make the trip to Deal to visit him on "Ryan's Rock" which is the last flat rock on the Phillips Avenue "jetty" where some of his ashes were spread. I was there today mostly for the visit but to throw the fly rod as well. One of the songs that always touched my heart was "Blackbird", the version done by Paul McCartney, a song that Ryan had mastered on the guitar in short time. While standing on his rock I made some casts and watched the sunrise and smiled.
There wasn't anything going on fishing wise so there wasn't too much to take my mind off of Ryan and what has happened in the world since he left us four years ago, and a lot of it isn't good. While I wondered what he thought of all this, I also wondered, as he is perched in the Heaven that I believe in, if he has a front row seat able to look down and around, and see all the good and bad we experience on this planet. 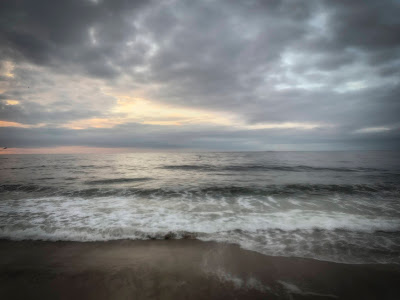 And those thoughts led me to another song that brought a smile to mind face and stayed in my head most of the day. "Standing on the moon, with nothing left to do, a lovely view of heaven, but I'd rather be with you". That song is from the Grateful Dead and I have seen it done live many times, the best times sung by Gerry Garcia before he passed in 1995.
I left the beach with only one hit from a small fluke that grabbed my fly in the wash. Later in the day I got a text from family sending me the below picture of Ryan and I. That was taken in the early 2000's on the Lackawanna River in Peckville, PA. I have great fishing pictures of all my kids and they are precious to me and make me realize how lucky I am to share the time and space with them and having the blessing of being their Dad. 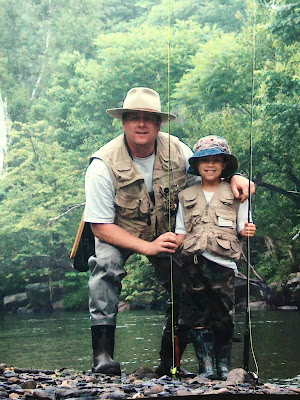 Posted by The Average Angler at 4:43 PM