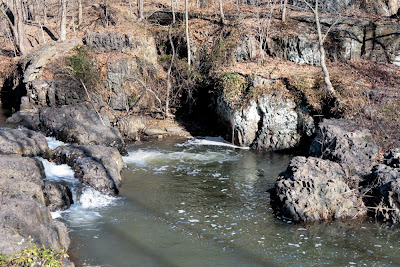 Today I criss-crossed the State while on assignment for New Jersey Monthly magazine. My first stop was up in Union County and I stopped at a little stream called Green Brook in Watchung along New Providence Road. Surprisingly the water levels were low and clear. The stream followed the road below a pond and through the remnants of what appeared to be an old mill. There are signs from the NJ Fish and Game noting trout stocked waters. I am sure itgets pounded in the spring and warm in the summer. I will have to try it sometime if I'm in the area. 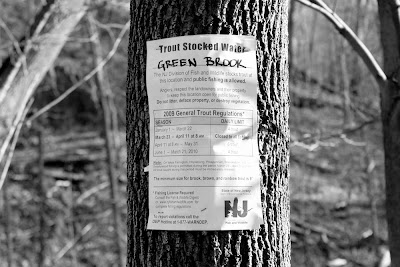 On the southern part of my trip I was on 195 heading east from Trenton when I decided to check on an old haunt, the Manasquan River. It is the river that I started trout fishing as a kid about 25 years ago. I pulled off the highway onto Lakewood-Farmingdale Road and turned around to get into the access below the bridges there. As I pulled down the ramp I saw a car parked there with license plates that surely belonged to a fly fisherman. Below the small falls a 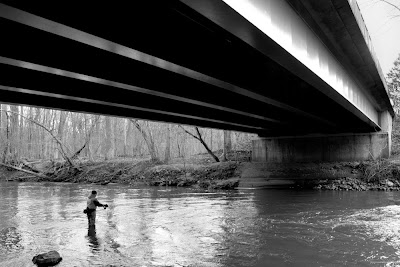 guy was nymphing in stained-to muddied water. As I watched him I saw he had an attachment to his reel seat that seated the reel below the rod. I haven't seen that before, and I was surprised I didn't notice it at the Somerset show. We started talking and he explained to me that it was called a Balance Reel Arm, used to perfectly balance a rod and reel. He is a regional rep for several companies, including Ross Reels. 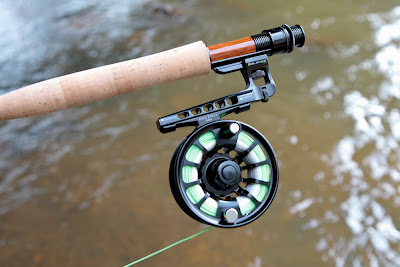 We talked about some winter fishing we had both done while it was warm and before the monsoons that came in the last few days. He said he had fished here and was catching small sea-run brown trout. In 1997 the Division Fish, Game, and Wildlife released 16,000 eight inch brown trout in the lower freshwater and brackish water of the Manasquan River. I am going to research this a little further and maybe even drop a line in an old haunt that is just a short drive from my house.
Posted by The Average Angler at 4:30 PM