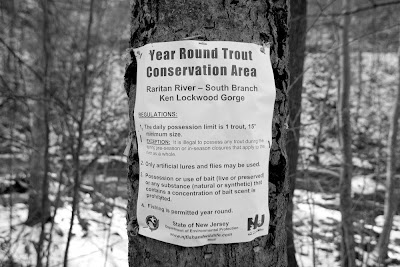 Finally we have a had a break in the weather. Not only here in New Jersey, but all across the US. Yesterday the temps were up over 30 degress for the first time in a while. With todays forecast calling for temps to crest 40, I decided to jump in the car and head out to the South Branch of the Raritan River at the Ken Lockwood Gorge. I entered through the lower access and after a short drive I had to pull over and park. The new and improved road had iced over and there was gate just above the lower parking area.
After getting my fishing gear, my camera gear, and my audio gear I started the trek up to the bridge. I spoke with a few guys who had a fish or two during the warmest part of the day, which was about 42 degrees around 2pm. When I got up to the bridge I took the water temperature and it was 38 degrees. I fished below the bridge with a size 14 black stonefly nymph 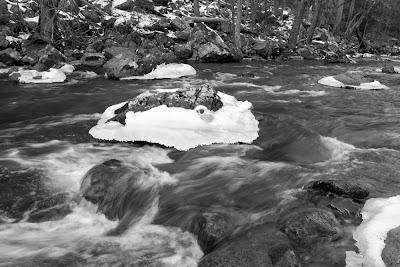 and continued down to the first deep pool on the bend, and the run that follows that. No bumps or hits. I continued downstream and fished the faster water, again with no luck. I did stop and watch a great blue heron that was perched on a rock staring dead into the water. After a while he took flight and I fished the area he was keying in on, again to no avail. I had made my way out into the middle and encountered deeper water as I tried to get back over to the bank. About 3/4 quarters of the way across I hit one of those vaseline covered rocks and lost my footing. Luckily there was one of those big boulders in front of me and I grabbed on. As I did this my foot went under the rock and as I looked down a very large brightly colored rainbow darted across and set up under shelf ice that had formed near the bank. I got my bearings and footing back and for the next 45 minutes tried to entice a strike using the stonefly nymph and later a black woolly bugger. I got a few looks and maybe a refusal but after my on again off again casts the trout took off downstream. I was glad to at least see a fish. On my way out I met up with a couple of guys who had caught a fish or two. We talked for a while about the river, and about some of the latest chatter on the fly fishing forums on the web, mostly about Garden State Trout. I had one last almost-break-my -ass on the ice that had formed across the road shortly before I made it to the parking area where Bertha was. All in all, a good first day, although a trout would have made the first 2010 outing just a tad better.
Posted by The Average Angler at 9:29 PM