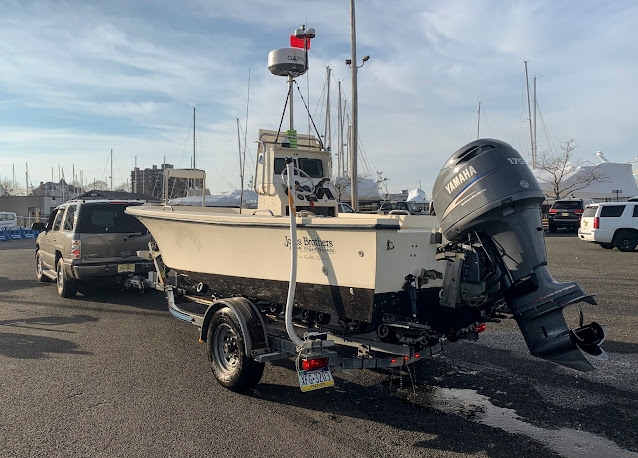 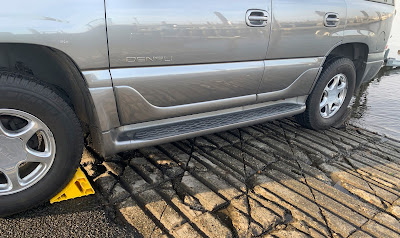 Best picture of the day is above, boat securely on trailer and Yukon safely off the ramp. So the takeout went well after chocking three of four wheels. So the end of the trip went well, but we hit a bump before we headed out. Today I shared the boat with Leif for one of my fish-a-long trips. We had this day picked a few weeks back and luckily the weather held out long enough to catch a bunch of fish. 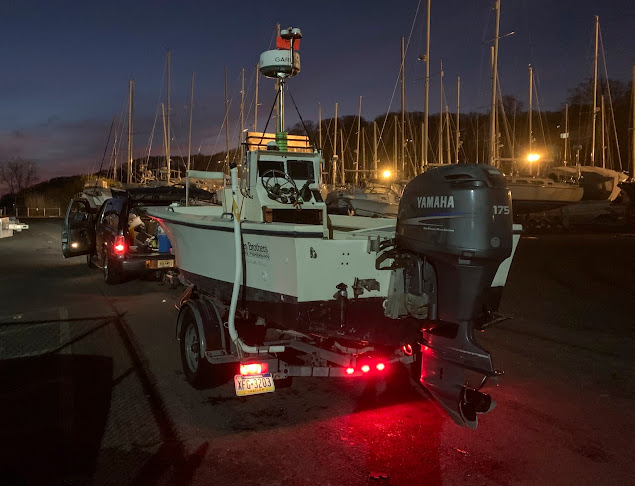 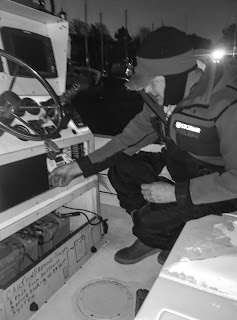 So I had the boat backed off the trailer just after 6 am. I went to fire her up to back her off the trailer and tick-tick-tick. The motor wouldn't turn over, after having it on charge all night.  So I got her back on and pulled her up the ramp and off to the side as the traffic was starting to build. I tried to jump it, nope, tried to charge it, nope, lastly I went to the marina and they gave me a jump pack and after hooking it up to the 24 volt batteries and turning the key it started. Leif and I jumped into action and quickly had her wet and we were underway. 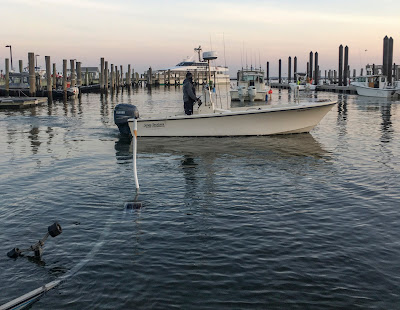 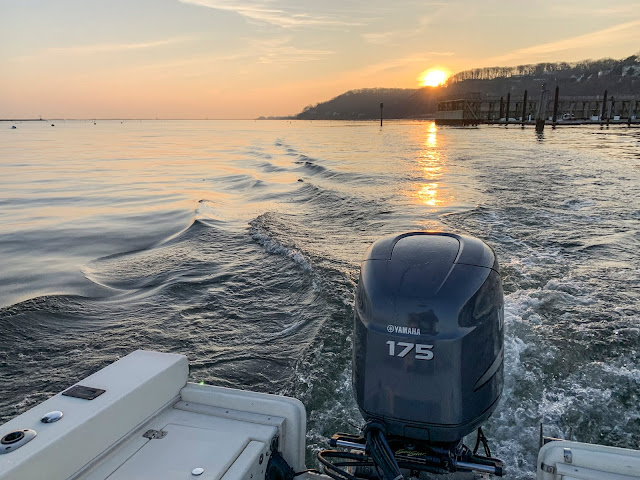 We headed out and after turning the corner we could see the fleet out near the line. Even with the glare I could see birds, a lot of them, down off the beach. We went and quickly were hooked up. It was a day of fish, a lot of them, probably three dozen or so, with four being better than keeper size. 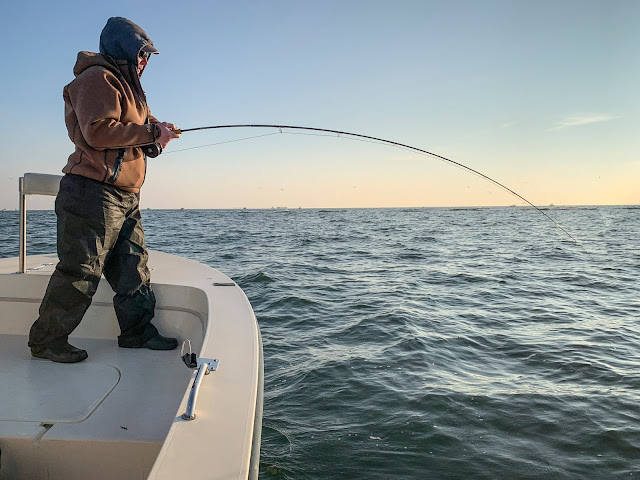 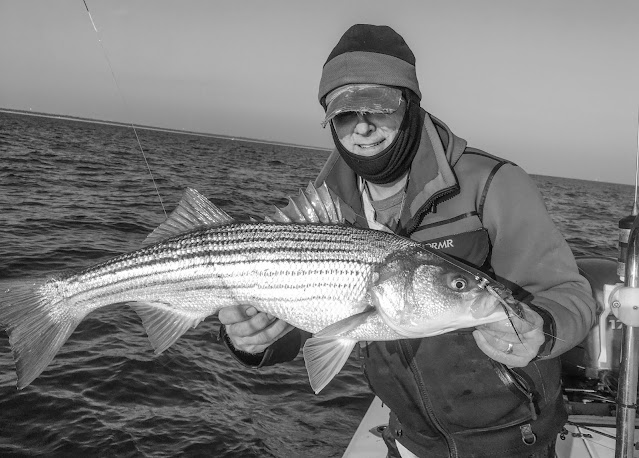 When we went the SW wind wasn't too bad, good bird action, and calm enough where you could see the swirls and splashes as the fish were up on the sand eels, bunker and micro white baits. The fish, even the schoolies, fight hard and have sharp spines that seem to catch you every time you touch one. Most of the day the fish were low, and you needed to nymph them up, and the larger fish 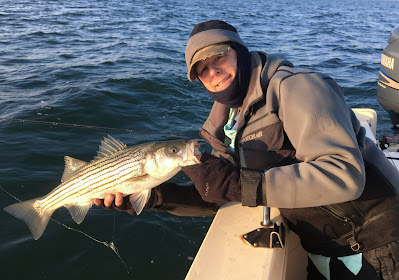 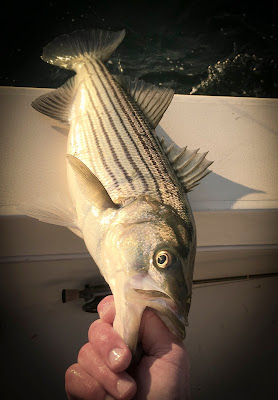 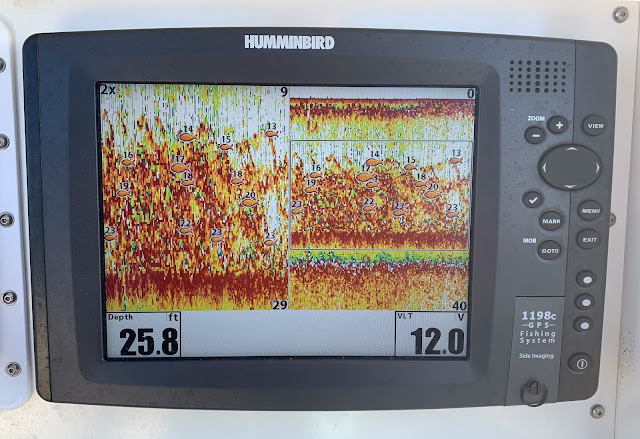 seemed to be along the bottom. When we did find the fish on the screen and were able to get them to bite we were usually doubled up. There was a point where the SW wind died and we were all alone and just on 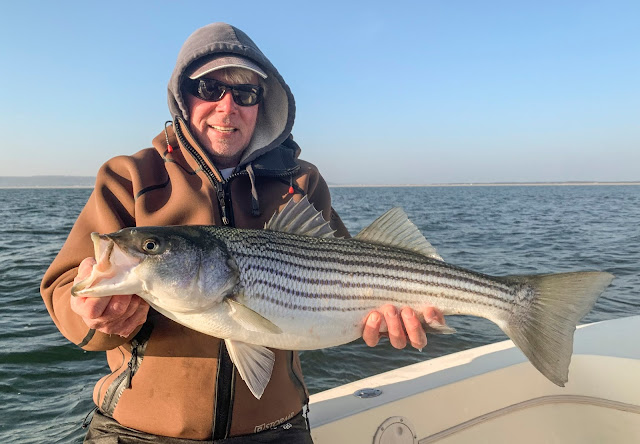 them really good. The birds were the best fish finder today, as any time you were able to nose into a flock picking there was fish under them and they would eat. It wasn't albie run and gun but you had 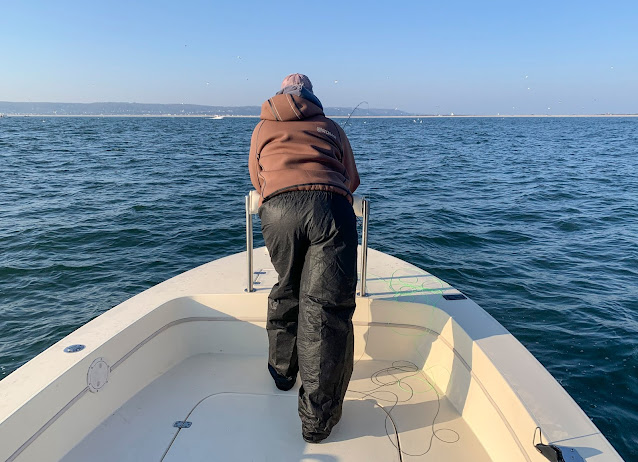 to first be in the area and then position yourself for a good drift or just motor in and uphill a touch and fire as soon as your hand came off the throttle. All of the fish had sea lice and I'm thinking these were the ones last to leave Montauk in early November. So its December 11th, not bad, 60 degress and fish all over the place. Just as the wind started up we decided to take a ride to join the fleet at the Rocks, we had a guy stop and tell us he got "two 30's and a 40 on the fly rod" there, but next to us he was throwing a spinning rod, but, hey, he had a Jones 19"10" so I believe him. Jones brothers guys don't lie.... From noon on the wind went S and it just slowed things down to a pick. 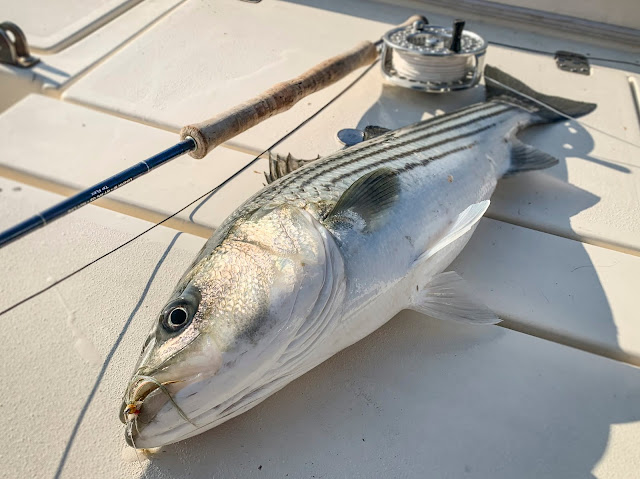 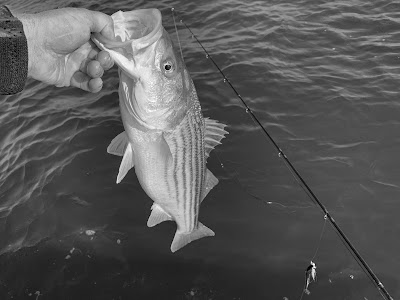 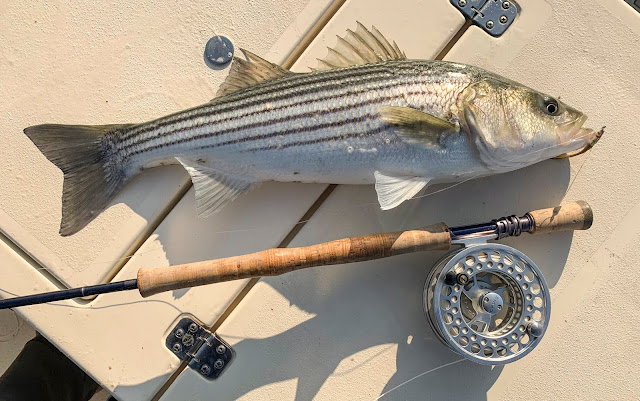 Leif broke a rod on a larger fish, and after coming off the ramp and putting the rods in the truck I hit the switch to put my passenger window up, and, I heard the snap. My favorite H2 11 wt. I think I can salvage it as it was just the tip of the tip section that broke. Like I said to Leif "What's a good 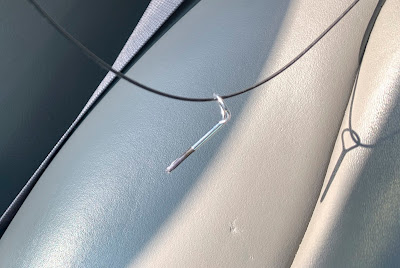 day without breaking a few rods, or submerging your truck". I have a big update on the truck, I'll save that for an upcoming day as the weather isn't looking good going forward, and who knows how long these fish will stay. In Monmouth County its a boat thing, while those driving or walking the sand in Ocean County continue to fare better, kinda reminds me of 2011, just not in the insanity that was nearly 10 years ago. If I do go and fish the beach I will making a right off 195 and heading south on the Parkway till Exit 82. 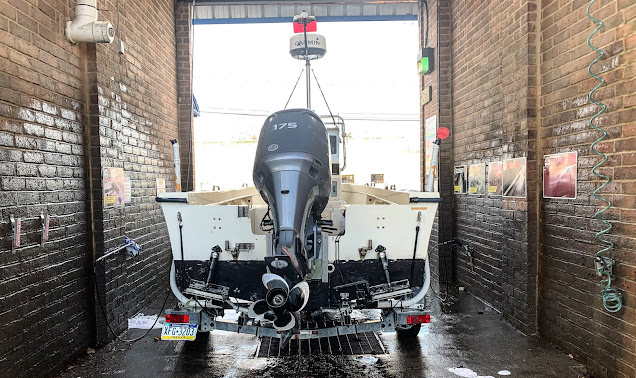 So I'm not sure what the rest of the year will bring as far as boat trips go.  Rory from New York I got you in mind, but the weather patterns have been from good, to great, to shit, and then change again all within a week. Today was a great late season day on the water, and if it was my last time at Conte's in Long Branch washing her up, I'm good. It has been an adventure with Jim's boat in a short period of time, maybe I should put her to bed and count my blessings.
Posted by The Average Angler at 8:20 PM