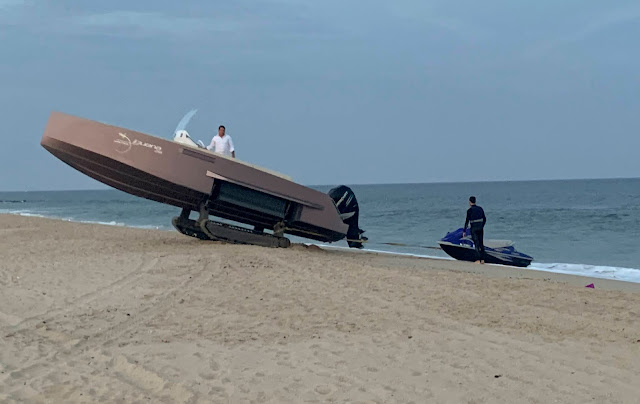 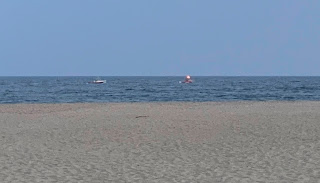 So things last evening just got weird. It started out at 7pm in Long Branch as I watched the above Tow Boat service tow someone back down to Shark River. That's not really weird, but when I got to Deal the first thing I saw was boat in tow in front of me. Then I looked over and saw, what I thought, was a beached boat but after walking to see if they needed help I found out it was the rich-and -famous interpretation of a cartopper. Cartoppers are, well really were, small aluminum boats, with engines, that anglers used to carry, on the top of their car, and then launch from the beach, far away from any boat ramp or marina. 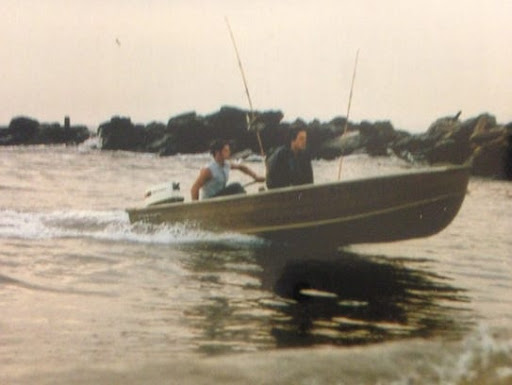 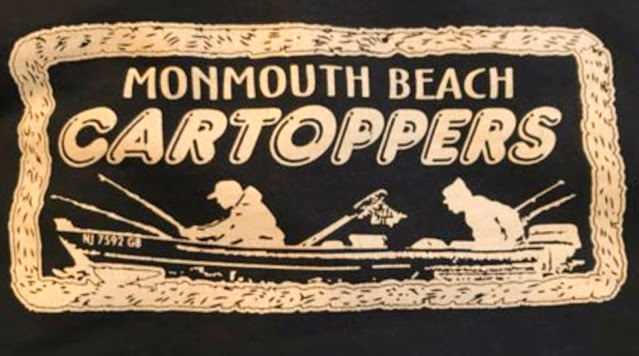 Well this guy, could be a great guy, is fortunate to live on the beach in Deal, and what he has is an amphibious boat. His is made by Iguana, you can see more HERE. Looks like they run just about $600,000. They are good for Seal Teams and for those that have it like that. He hits a button and tracks come down like a tank and he traverses the sand util he gets in the water and vice versa. This evening he came back in and then towed a jet ski back up to the old ranch. Now, the last two summers we have seen an increased numbers of ATV riders on the beach in Deal, which is illegal. Is this legal? Can you have a motorized vehicle on the beach without a permit, which would be open to all? Would it fly in Belmar or Spring Lake? Or Monmouth Beach? I would love to see those old salts from the Monmouth Beach Cartoppers club as they see this today, they must be rolling in their graves. 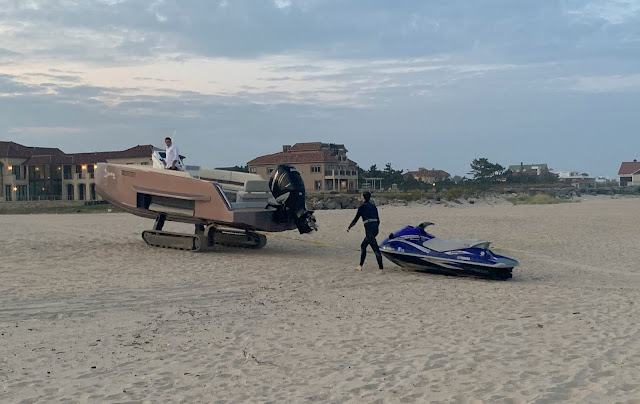 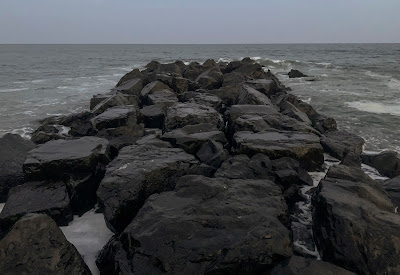 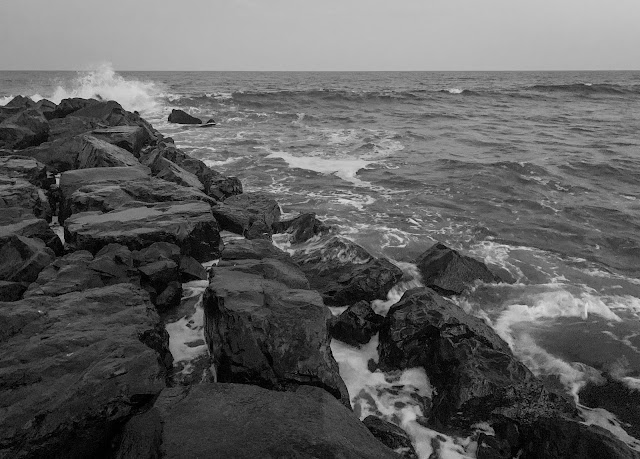 Conditions were very good. I was there about 2 hours into the ebb tide, little SE wind, water clean and green. And although you can't see it in the pics there was some good swells that chased me to the inside portion of the rocks. It took about 20 minutes and about 30 casts to land the below October bass on a white Snake Fly. Since its been, for others, a one and done thing, I decided to move along and head home. I first wanted to check a spot out back where the bait is usually think and there can sometimes 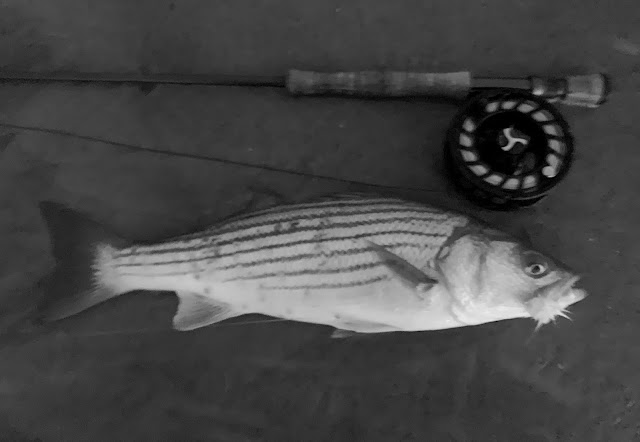 be some bass, if not always blues of varying size for sure. There's not much room and when I walked in Eric was there and we watched as the bait moved and the occasional fish broke the surface. I tried and tried, as did he, and he didn't start catching 2-4 pound bluefish until he liveliness some peanuts. As we stood there we could hear the roar of the engine of a motorcycle. He was lock step with a car and, either, he was trying to pass, or they were racing. It was one of those things where you hear it, and then you look, and then look back at what you're doing. Well when we looked back at the water we heard the screech, and then the boom, and then the screams. 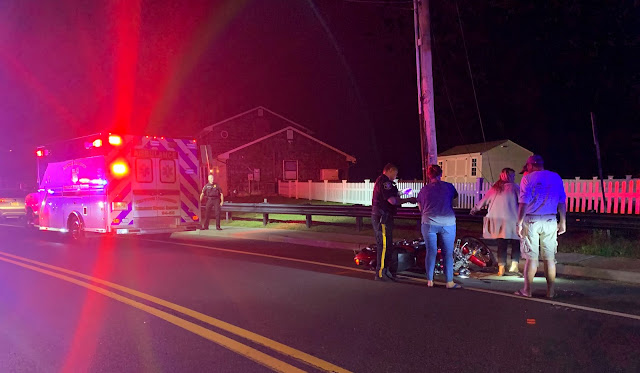 We're about 500 feet away and Eric starts running. One thing I learned from being a fireman and EMT and nurse, never run. So I'm walking with my stripping basket on, rod in hand, on the phone with 911 requesting an ambulance and paramedics. When I get there there's no one there but the patient, his girlfriend, the other fisherman and two people who stopped. He was down but not done, and after using a pair of scissors to cut off his clothes and asses him, he only had a nasty compound arm fracture which I had to straighten and hold traction to return the pulse to his wrist. 'Its gonna hurt like a bitch so just take it", and he did.

The cops and ambulance were quick and he took a short ride over to Jersey Shore for, I would bet, some surgery on that arm. His helmet showed the damage from the crash, and I couldn't imagine what he would have looked like without it. If this was in Pennsy, a no helmet law state, it could have been ugly. 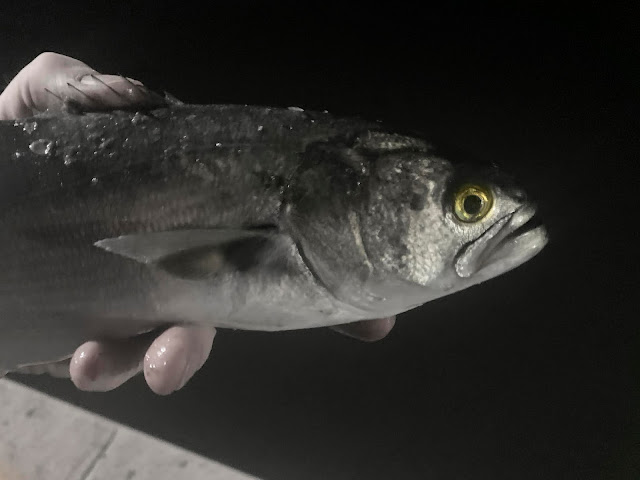 I went back to fishing and it was more of the same, little blues on bait. Things have started to turn on, albies in the boats and occasionally the beach, bluefish, mostly smaller ones just about everywhere, and the bass seem to be coming to eat breakfast and dinner on the beaches. Maybe fall, although the air and water are still warm, has arrived.

Posted by The Average Angler at 8:29 AM