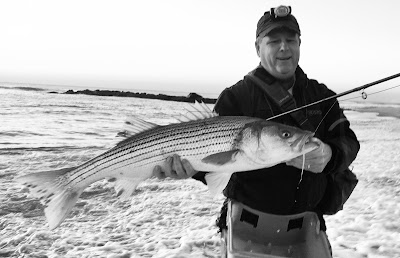 This post surmises a recent post made by Tony Frederich the VP of the American Saltwater Guides Association.

Basically it appear that most states, well some, are trying to do the right thing in protecting the striped bass before the moratorium sets in in 2024, my prediction. Thirty years after the Atlantic Striped Bass Conversation Act was passed October 31, 1984. Connecticut, New York and Rhode Island are working to reduce the killing of bass while attempting to balance a fishery for anglers and meeting the 18% conservation equivalency (CE) as set both by the ASMFC. Basically the spineless folks at the ASMFC acknowledge that overfishing is occurring and that "science" is showing poor numbers in both YOY and older bass.

Leave it to New Jersey to be assholes. Connecticut abolished their Bonus Tag system in order to help out. Here in Jersey, a State without a commercial fishery, we've "allotted" ourselves, 215,000 pounds per year to anglers who want that "Bonus Tag Fish". You know the one that you are supposed to apply for, pay, and then return...... According to Frederich NJ "sold" 5000 bonus tags in 2018. And 1100 were returned!! That means between the boasts and the beach only 1100 fish were harvested. Now thats a joke.

Also remember, the Bonus Tag system.....like Bonus was in something extra, doesn't mean you have to catch legal sized fish and then get the "Bonus" fish, order doesn't matter.

This my friends, weather dead-on accurate, or slightly off, shows New Jersey doesn't care about sustaining a striped bass fishery at all.

Posted by The Average Angler at 9:41 AM