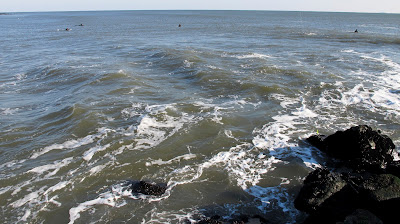 That's what I heard walking past some guys scouting out the area off the Phillips pier. For weeks I have heard guys speculate that we'd be catching fish through Christmas. Well there's a few doubters out there. So anyway, due to work and the kids today I was able to go out at, well, dead low tide. 1010am. I got there  at 955am. I stayed till 1105am. There were surfers out, but nobody fishing. The water was clearer than yesterday evening, but still tinged. I took the opportunity to scout out the underwater landscape while the water was low. I walked to the tip of the groin and made some pictures and then fished to the north off the beach where I was able to better identify the structure there. There were birds working out a ways in the same spot they were last evening. I didn't see any fish on the surface. As I digested what the guys were saying as I was leaving I heard the other guy say, "Where's all the bunker?' 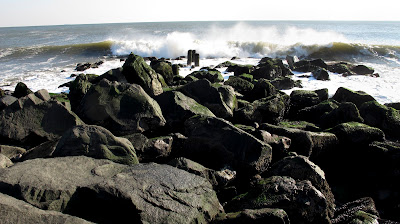 Posted by The Average Angler at 11:31 AM