02.15.10 Winter fishing the West Branch of the Delaware 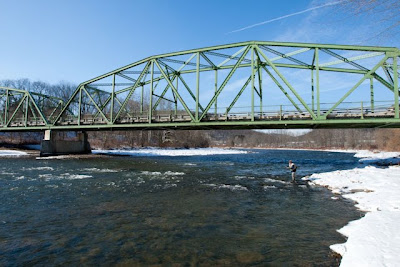 Even though all my kids had off from school today I was still able to take a quick run up to the Catskills and get some fishing in. My first priority was to check out our house in Roscoe. We haven't been up in a while and I wanted to make sure it was still standing. Luckily that area didn't get the snow we got down the shore so there wasn't any additional snow load on the roof. The area didn't have the amount of snow on the ground that we have here in New Jersey. The town of Roscoe looked kind of bland, the skies were gray, the dirty snow was piled up throughout town, most shops including the two fly shops were closed, and it was cold. 28 degrees. The only difference I could see was someone painted the Reynolds House yellow and purple which is a totally different look. It is now an eye opener.
I pulled out of Roscoe and headed west on Route 17, soon to be Route 86, and thought about where to fish. The only water that is open this time of year is the border water between NY and PA. So from the Upper Gamelands stretch of the West Branch through the entire Mainstem. I decided to hit the Gamelands but I was going to access it on the Route 17 side at Monument Pool. The snow plows had filled in the access at the railroad tracks so I parked near the log home headquarters and walked the mile to get into the water. I fished the braids for a while 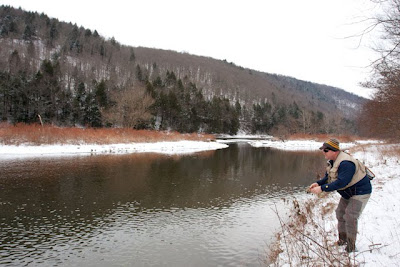 running a black wolly bugger along the deeper water along the banks with no luck. I walked down past the parking area opposite the trailers that are perched above the large pool. As I fished I could here the banging of nails as two a large home is being built to the right of the footbridge that crosses the access from the trailers. As I fished here the sun came out and the clouds started to disappear. It was just before noon and I was hoping the water would be or get a little warmer then the 36 degrees it was. I decided to take the long trek back to my car and head downstream. I drove down to Hancock and parked at the Route 191 bridge. The sun out, the clouds were gone and I was sure I would get into at least one fish. I stuck the water and was at 36 degrees, same as up above. I fished the fast water above the bridge and then into the large pool below. I switched off the wooly bugger to a stonefly and finished with a hares ear. I 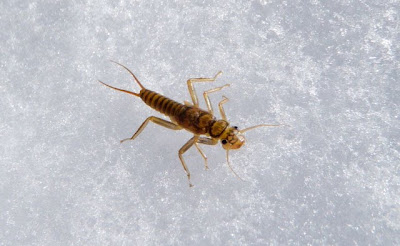 decided to flip some rocks and found a great yellow stonefly nymph. I took some pictures and let it go. What a great meal they must make for a hungry trout! I had the entire river to myself for the day, which either means I was a genius or a fool! I can't wait to come up when things heat up a bit!
Posted by The Average Angler at 9:22 PM