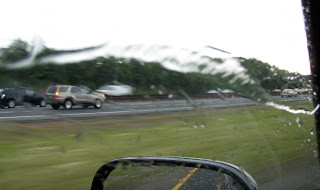 So after early morning school dropoffs my new fishing partner, Erin, who's been fly fishing for, say, two weeks, and I packed up and headed out to fish the Musconetcong. In doing this I would have had to blow off her swimming lesson at the local YMCA. As we approached the Driscoll Bridge on the Garden State Parkway it started to rain. A quick glance over to the western skies showed an ominous dark cloud filled sky. So we decided to put a fork in the trip out west and headed to the y for swimming. After the lesson we headed outside to nearly 80 degree temps and a blue sky. We stopped at home and made the switch from a 5 weight rod for trout to a 9 weight outfit for stripers and blues. I decided we'd hit Sandy Hook to see if any fish were in the surf. After a quick picnic, we headed out over the sand and picked a spot where people were fishing with clams and bunker. It has been a long while since I opened my fly wallet and put together my 9 weight Orvis rod. It was a beautiful day on the hook. The ocean side was clear and flat, with hardly any wind. There weren't any birds or fish in sight. I didn't even bother to tie on a fly, but I some time practicing my cast. I handed the rod over to Erin who practiced 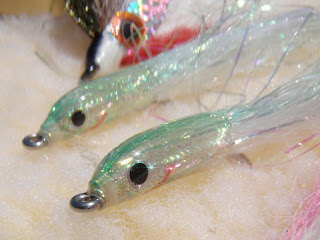 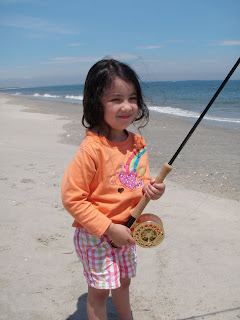 stripping in some line. Luckily a couple next to us landed a 7.5 pound bluefish who took the front end a bunker. Erin was amazed and couldn't figure out why they just left the fish to flop

on the beach. She mustered up enough courage to touch it's tail and asked about the gills on the fish. It was fun. They also caught a spider crab that we checked for a bit before throwing back into the surf. This is a fishery I must start to investigate regularly. Even though I am a devout trout fisherman, the opportunity to catch big fish on a fly rod in my back yard shouldn't be wasted. I am only a few miles from the ocean, and it's easy enough to just take a quick drive down to see what's happening. Really, the first read is the parking lots, if there're full, then there's fish. So today I continued "guiding" my three year old in fly fishing in New Jersey, I guess she's my first client. After a few pics we headed out, surely to return. 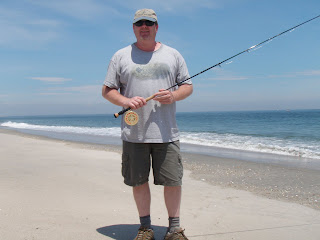 Posted by The Average Angler at 10:21 PM