05.29.08 Lotsa water on the Delaware and whitecaps on the Willow 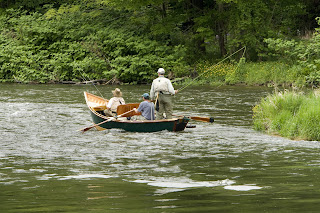 Today Cindy and I headed for a weekend at the Creekside Cabins on the Willowemoc Creek in Roscoe with my brother and sister and their better halves. We traveled up early so I figured we would check out the West Branch of the Delaware before checking in. On our way up it was obvious the area had recently seen some hard rain, more then we saw in New Jersey. The Willow and Beaverkill were up, way up, and clearly unfishable. A few dedicated, or desperate, anglers hugged the banks just trying to wet a line. The West Branch was up to 1,800 cfs, and there was more rain on the way. We stopped by the West Branch Anglers resort to see how things have been and to get a few flies. Larry said things had been pretty good before the hard rain the last two days. He said Wednesday the 26th was one of the best days he's had on the West Branch in some time. Green drakes were coming off, and big fish were on them. I picked out some March Browns and a few Sulfurs in hopes that the water would settle down and clear up while we were up for the weekend. Larry, being the good salesman, got me for five drake patterns, just in case. Cindy and I went up to Deposit and checked out the no kill at Route 17. Again, there was lots of water. Between the rain, runoff from Oguaga Creek, and spillage over the top of Cannonsville the water was way up. Some float boats were camped in the area of the water treatment plant throwing wooly buggers and muddlers, but we didn't see any fish caught. There was a sporadic sulfur hatch, and there were a few fish taking them. We drove up to Stilesville and found the bulk of anglers that were on the river. Of course being above Oguaga, the water was a bit lower. We pulled into the parking area and just as we did the skies opened up. Great-more rain. We took a quick tour through Deposit and headed back down 17 and pulled into the Gamelands to see if we could catch some drakes on the water. There were a few cars in the parking area on the other side of the railroad tracks. Some boats were in the water anchored in the tail of the large pool there. From a distance we could see them casting to rising fish. We tried to get over and around the beaver pond but it was flooded out. I set up my video camera to watch as they fished the pool opposite the trailers, but when I looked up the rain that was coming down in Stilesville had made it way down to where we were. So much for that, and the drakes. The skies were clear as pulled off of Route 17 and into Roscoe. We drove over to the Beaverkill and found a few brave souls throwing metal at the Junction Pool. It was unfishable. High, fast and dirty. We made our way to the Creekside Cabins and found our stretch of the Willowemoc at the Hazel Bridge Pool in the no kill section. When we first got there it looked like it might be okay in a few hours if the rain held out. It was up, cool, and tea colored. Then the rains came, and came. That last bit put a fork in it for the day, and for Saturday- but we hoped that we might get a shot Saturday night and into Sunday.
Posted by The Average Angler at 7:00 AM