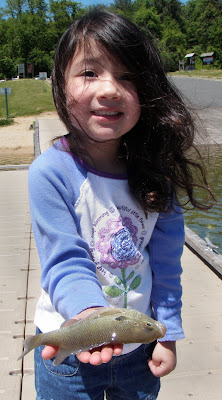 Today my three year old daughter Erin caught her first fish on a fly rod. We started out the day traveling west to fly fish for trout on the Musconetcong, but settled for a bunch of sunnies at the boat ramp at the Round Valley Reservior. We traveled up Route 287 and then jumped on 78 and got off at the Route 31 Clinton exit. We stopped by the old mill in the center of town to see what the South Branch of the Raritan looked like. We didn't see any bugs or fish, but there was a bunch of bait guys fishing below the steel bridge. I made a quick image before we headed back west to the Musconectcong River. 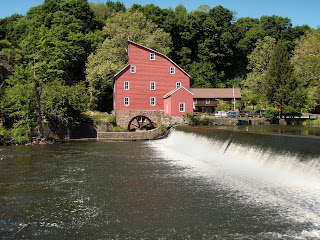 We found the river and then searched for water that wasn't posted and had easy access. I drove down towards Bloomsbury, and then back up river into Pohatcong, but all we found was posted water on Person Road. And when I say posted, it was posted- on trees, on wires hanging over the river, and everything that you could drive a nail or staple into, it was posted. So needless to say hitting the Musky was out. Interestingly, the NJ DEP changed the stocking schedule this week because of the mandatory work furlough the state enacted due to the economy. So several rivers that were usually stocked on Friday received their allotment on Wednesday. It looked like nice water although again, no bugs or fish. 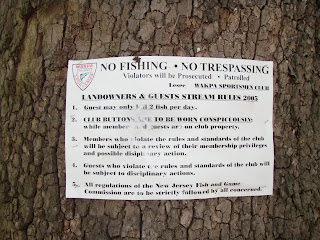 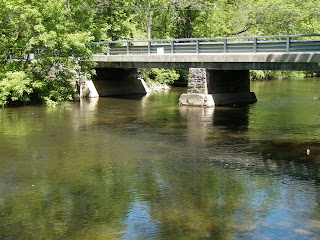 So it was back east on Route 78 and then off onto Route 22 for a quick outing at the Round Valley Reservior. We parked near the boat ramp and grabbed our chairs, cooler, and my fly rod and settled in for a nice afternoon. The water was crystal clear and soon Erin was pointing out fish that swam out from below the floating dock. This is what this day was about. After a quick bite I put on a hares ear nymph and handed her the rod. No need for instruction, she said she knew what to do. After a couple of scary casts I settled her down and gave her a quick lesson. She was patient, and the fish were also. They couldn't resist the small, and very active nymph "swimming" through the water. Soon she had a "fish on"and it was a dandy. After a quick picture it was gently? released and Erin was back at it. There were some small bass in the shallows and I gave it a shot but there were no takers. At one point a trio of larger bass swam out from under the dock, and my guide quickly pointed them out, but they too passed on our offering. We caught a bunch of sunnies and one small bass, all lip hooked and easily released. Erin let everyone know who walked down to the docks that she was catching fish. It was a treat to watch as she tried to figure out what to do with the line and the reel. 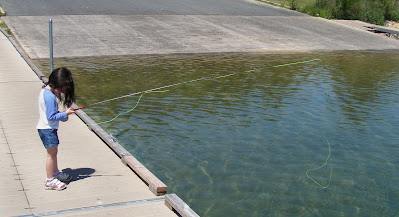 What a great time. Funny how sunnies with your daughter, or son, on a beautiful day in May can easily compare or beat a 20 inch brown taking hendricksons off the surface of the West Branch of the Delaware!
Posted by The Average Angler at 10:11 PM