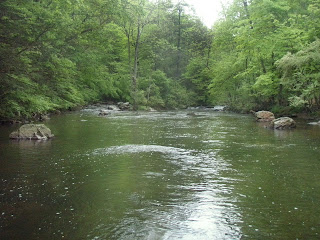 Yep, had to do it. Last night I went online and navigated my way through the process of buying a New Jersey fishing license off the web. I printed it out and loaded my fishing gear into the pick up. This morning I made the long drive, well a little over an hour, to the Ken Lockwood Gorge. Okay. I'll admit. I didn't get the same feeling as I do when I get to either of the New York West Branches, but it was cool. I fished a section hard below the two pools that are below the parking area near the bridge. Nothing. Mixed it up with some guys throwing metal. This guy got one, this guy nothing. I didn't see any trace of a fish the few hours I was there. Then I walked upstream and met the guys walking down from the other parking area. Oh well- so much for walking my way out of traffic. So on the way back down I saw that caddis were in the air. When I got down to the bridge, there were fish rising. Nice. I put on a caddis, a size 18 and got to it. I picked up 2 quick, after my fly broke the surface, and another off the top. I have to admit, it was fun. The fish were about 10 inches, and all looked like they were related, but it was cool. I stopped and talked to some guys who said they have had good hatches here lately and that the March Browns would be coming off soon. March Browns? Really. So I headed downstream and stopped just before the private water began and jumped in . In a few casts I picked up another, in real choppy pocket water.
I followed the river down and found an old favorite place of mine. I got into the river and the rain started back up. I was fine with whatever happened next as my day was already made. I had already caught some fish on my "return" to NJ fly fishing. In a few minutes I had one on a hares ear. And then the fish turned on. I had at least a dozen fish taking small caddis right in front of, and next to me. I had a blast. Caught some, lost some, but got a warm and fuzzy feeling about fishing here as I had done so many years ago, mostly during my mealworm and fathead minnow days. I continued to fish and when the rises slowed, I switched over to a pale hendrickson emerger. I had more action on the way down river, not fish landed, but more action. I smiled as I came around the bend and saw three large pools that I had fished many, many times before. Today I took at least two fish from each pool, and in one another fish on the way out. It was a blast today. I was home by 4 o'clock. I probably caught 14 fish, all the same size in that 10-12 inch range. I felt like I returned home, and forgot how much fun catching, and releasing, hatchery fish can be.
Posted by The Average Angler at 11:10 PM