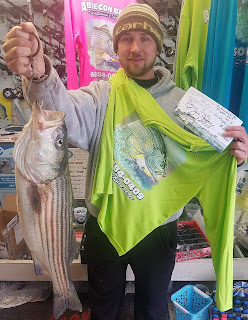 It's time! Now the rivers and bays are open so early season striped bass fishing has begun. Above is the first of the year legal bass taken from the Mullica River and weighed in at the Absecon Sportsman's Center on March 1st. Guys our soaking worms and clams will have the first shot at the fish and in a few more weeks the fly anglers will get their shot.

There seems to be a growing population of anglers realizing the poor numbers of striped bass out there and are at least considering catch and release. Below is a screen grab from Facebook showing what happens when commercial anglers find the fish. I still don't know how the species survives and the with their heads in the sand can't see that something has to be done regarding responsible harvesting. I say, 'Make it a game fish". 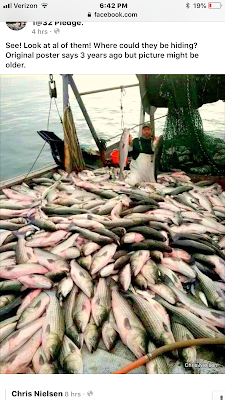 I'm gearing up for the spring ready to take first timers and experienced anglers alike out for some fun on the sand or on the boat. The goal isn't to just catch fish, but to learn the sport, improve you casting, learn about the species, and have fun. Call 732 261 7291 or email me to book a trip. School's done in April and I'll be brain free and ready to fish.

Posted by The Average Angler at 6:42 PM