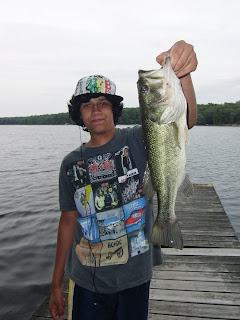 Back home in New Jersey today Saturday the 14th. Spent a week in the Poconos. Had a great time, glad to be home. Spent a lot of time with the kids fishing, fishing their way, my way, any way. I showed them. I had my fly rod. So did my youngest Erin. We caught about a thousand fish. Shiners, sunnies, crappies, perch, small bass. My other two, Sean and Juliet, caught fish after fish on the docks and in the boat. Sean was the more focused and persistent of the kids, getting me to row him around the lake at 530 am in search of the big bass. He caught the big fish last year while on vacation last year in the Adirondacks, a 30 something inch northern pike that we enjoyed from head to toe for dinner. That fish is pictured below, 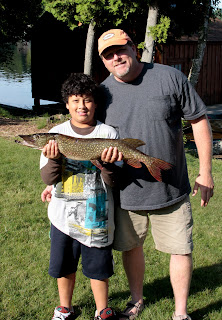 During our early morning fishing we caught fish, but no bass. My oldest boy, Ryan, who is about to turn 14, and is too cool, took a late afternoon trip with us to the lake. Walking around with ipod blasting in his ears and kicking stones he spotted a bass, a big bass. He signaled me over. I could tell from his excitement, AC/DC shirt and Bob Marley hat and all, that it was a big fish. I remember a long time ago when he was that excited, when he caught his first cast to net trout on a fly rod, a 21.5 inch brown in the West Branch of the Ausable in 2005. I made my move off of the dock I was on to his. Sean wasn't impressed with the whole situation. He continued to cast a mister twister off a neighboring dock. When I got to where Ryan was....I was shocked. There it hovered, in shallow water amongst the grass, head steady on anything that passed by. I had a wooly bugger on my 5 wt and placed it in the water near the fish, he came out, took a look and went under the dock. That was that. I told Ryan to keep and eye on the area, in case it came back. I did that mostly to try and keep his attention on something to do with fishing. I switched up and was using Erin's 6 ft 3 wt and was putting on a clinic for the kids at the dock, a real ego booster, when Ryan called again. This time I handed him the rod. But first, I know....but I had to do it, I tied a size 8 barbless hook on and threaded a fat worm that Cindy had found in some leaves near the lake. Ryan gently let some fly line out and put the worm about 3 feet away from the fish. I could see the worm wiggling. Here he came. There goes the worm. Up went the rod. A few minuted later my rock star son was holding a huge slob of a largemouth bass, 23 inches...and had to be over 6 pounds, proudly for the camera. My poor son Sean was happy, but not. He did tell his brother, "Nice fish." I could see he wanted to ask, "How could that happen?" I made it a teachable moment. I explained to Sean that this has happened to me a thousand times. No matter how psyched you are, how prepared you are, how into it you are...at any given moment....no matter how fished through the section you just left is...someone could come along and catch the fish you've been searching for, right in front of your eyes. I gave a Sean a arm around the neck pat on the back and hug. And with that, Sean was just about done with fishing for the rest of the trip.
Posted by The Average Angler at 9:48 PM