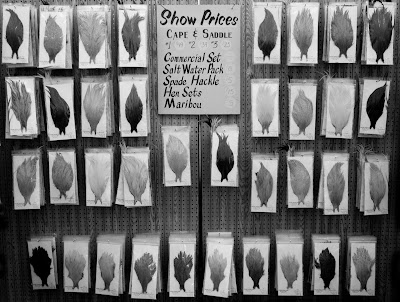 The Collins Hackle booth
Today I met up with Chris Roslan at the International Fly Tying Symposium held in Somerset , New Jersey.  He's writing a quick story on the show and asked if I would shoot an image while I was there. We first sat down with show Director Chuck Furimsky, whose also the Director of the huge Fly Fishing Show that comes to Somerset in January. Next we moved into the conference room that held some of the most talented fly tyers in the world. Dick Talleur, Charles Meck, Marc Petitjean, Enrico Puglisi, Robert Lewis, Harry Schoel, Dave Rothrock,  and more.
I walked the show and stopped in to see some fantastic flies being made, some looking more like real insects then flies. I went to a good lecture given by Mike McAuliff and John Collins on fly fishing the rivers of New Jersey from January- December.  I have to say I have never fished New Jersey streams and rivers from November through April, so I'll have to give that winter fly fishing a shot. I made some images of the crowds gathered around Charles Meck and Marc Petitjean, and spent some time watching and talking with Bob Lindquist from Long Island who was tying a peanut bunker fly.
The larger Fly Fishing Show is scheduled for Jan., 22-24, 2010 at the Garden State Convention Center in Somerset. See you there!
Posted by The Average Angler at 5:37 PM